It was called “Operation Crossroads” – nuclear experiments conducted by the US Navy in 1946 at the Marshall Islands in the Pacific.

Dozens of  ships such as the USS Independence were enveloped by a 94 ft. high mushroom cloud and after the blast settled, the Navy conducted studies on the aftermath of the explosion. 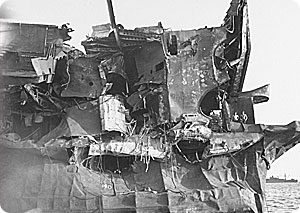 The “Independence” was heavily damaged and was initially planned to be sold for restoration.
Instead, the ship was loaded with containers of radioactive material and intentionally sunk off the California coast.
Other vessels were hauled to the military shipyard in the San Francisco Bay called Hunter’s Point where extensive cleanup and decontamination efforts were undertaken. 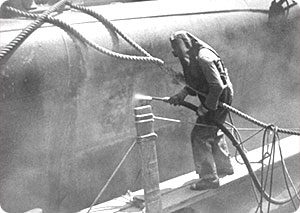 The Navy and then the EPA have declared the decontamination to be a success and the industrial area to be perfectly safe from radioactive materials such as cesium, plutonium, radium and strontium, some of which take thousands of years to decay.

Several decades later the area was passed to a developer and a new neighborhood has sprung up on the edge of the shipyard’s, a freshly painted town-homes with dog runs and breathtaking views of the downtown skyline. However, in 2014 these claims were questioned after a former decontamination worker claimed his bosses  ordered him to replace potentially contaminated soil samples with clean ones and to falsify records. Two former supervisors were later sentenced to prison for falsifying documents. 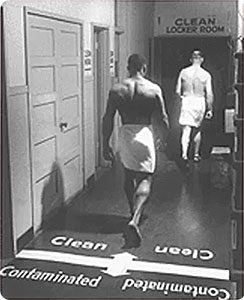 Last year, workers flagged a housing area as having radiation readings significantly above natural background levels.  A Navy contractor was called in to investigate.

An old navy deck marker was found, a military device with glow-in-the-dark paint based on Radium-266 and is highly radioactive.

The State Department of Public Health hired an independent expert and eventually concluded that no further radioactive contamination was found.

“- It’s literally mind-boggling — it is less than 50 yards away from where I live!” he said.

“It further proves that we need a complete analysis of the soil, and the regulatory agencies have proved that their assumptions were wrong and whatever science they were using to make those assumptions needs to be thrown out of the window.”

To examine top soil and objects for ionizing radiation directly with an accurate geiger counter (radiation detector) that won’t break your bank:

RADEX Geiger Counters for personal use

For an engineer working in the field, the standards for radiation detector are more demanding than those of “an amateur scientist” and this Geiger does the job well. I…